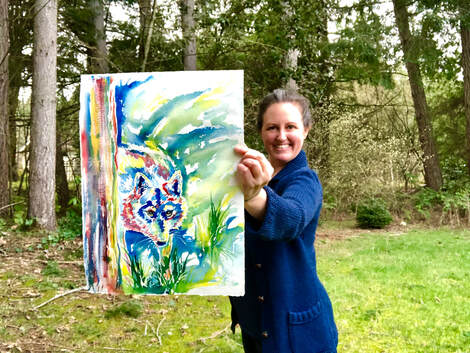 Suzanne Campbell works out of a private studio where she paints and meets with clients for energy work, meditation, and creativity sessions. She is the Vice President of the Poulsbo Artists League (PAL) which is a group of artists who support each other in the growth of their technique and exhibit artwork in regular spots around Kitsap County.*

Suzanne's work has come together from many threads. At age three, she climbed her first mountain, Mt Battie in Maine, with gentle hands guiding her way. Born into a family that loves nature and the inspiration it brings, she carries that torch on in every aspect of her work (she continues to explore the natural world and the finds inspiration in it at every turn). At age four, she received her first set of watercolor paints. It would be these paints that would show up over three decades later as a powerful medium in combining nature with art.

In college, Suzanne found her love of history and environmental science as well as a continued interest in art. Inspired by the beauty and power of images, she majored in Fine Art with a concentration in Photography and received her B.A.from the University of Pennsylvania.

Upon graduating she migrated west, taking the first of many solo road trips around the country, photographing, hiking, camping, and visiting friends along the way. Los Angeles became her new home where she found a wonderful job working at a boutique hotel, The Inn at Playa del Rey, which is located next to the Ballona wetlands, where she volunteered and got to enjoy the local wildlife. While working at the Inn, Suzanne continued to photograph and explore, traveling whenever the opportunity arose.

Gradually her travels began to shift to include a more internal exploration. She learned to meditate at a retreat at Lake Tahoe. The profound shift this brought, led her to studying meditation at UCLA’s Mindful Awareness Research Center and after years of practice became certified to teach meditation from the McLean Meditation Institute.

Meditation and the teachers she found are the threads that brought in a deeper sense of compassion, unconditional love, and desire to be of service in the world.

Letting her intuition lead the way, Suzanne travelled to England with a dear friend to hike the Cotswolds, a one hundred mile walk through the beautiful countryside. It was in a bookstore in England,- she stumbled upon a book about ancient energy practices that would be the next thread on her path. The author, Alberto Villoldo, wrote of an Andean tribe that travelled down from mountain peaks to share their teachings and wisdom with the wider world.

Suzanne studied energy medicine over a two year period at the Four Winds Light Body School with teachers in California and Peru and over time incorporated many new practices with her meditation teachings. She has seen and experienced deep shifts and felt the power of ceremony, intention, forgiveness, and speaking from the heart.

The flow of this new work called for a move. After fourteen years in Los Angeles, she moved to Washington State with the eagles as her neighbors. In Poulsbo, WA she took her first formal watercolor class. This opened up a world of joy and reconnected her to her youth and her first set of paints.

Suzanne has woven threads of photography, watercolor painting, meditation, energy work and love of nature to a living and breathing tapestry of service and love to all beings she cherishes and honors.  With love and service to the land and those we share it with, she paints.

*Due to Covid restrictions, local exhibits have been taken down and put on hold until further notice.
“Creativity and mindfulness are natural partners. Understanding how to think mindfully is the best way to bear through the roadblocks that keep us from developing our creative selves.”  Carol Dweck PhD